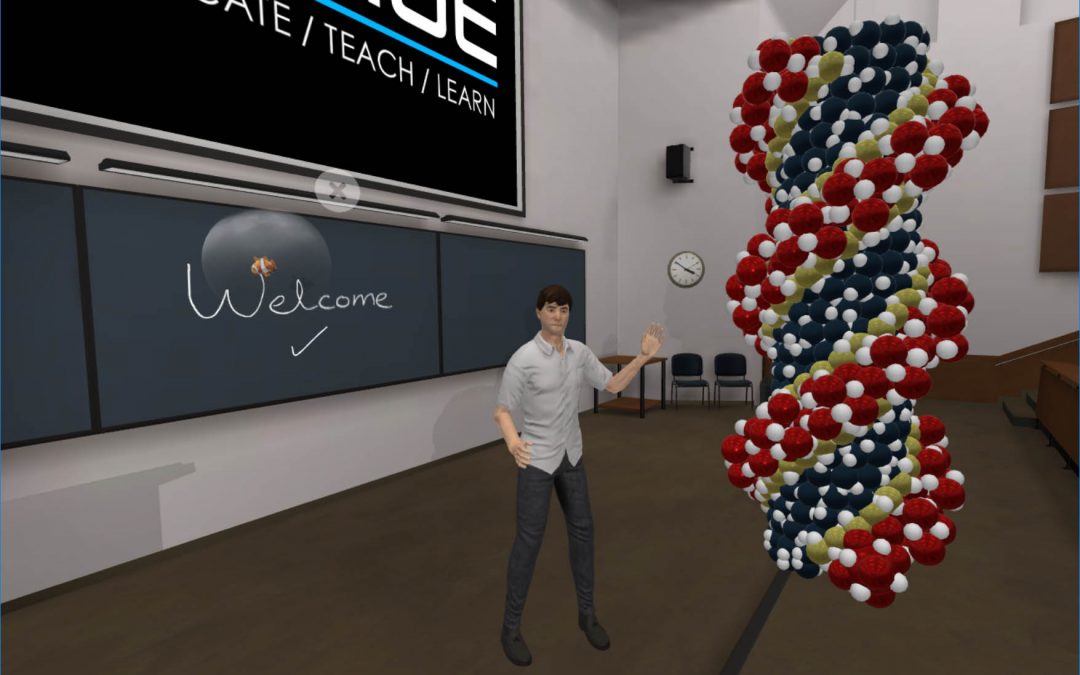 A friend of mine had his VR machine stuck behind a corporate firewall, so asked me to check out Engage VR on my computer. I was always curious, how it works, so today I’ve spent more than an hour in this amazing system and I can’t wait to share my experiences.

I think the purpose of this system is to teach students in virtual reality and create 3D learning experiences. You can show in the DNA spiral or medieval castles – and their demolition – in a usable 3D immersive environment.

I started up the Engage VR system on Steam. Steampowered.com is a practical portal to distribute and keep you software up to date. You can download Engage VR for free there and start it up any time even without a VR set.

I think for VR you would need a minimum graphics card of GTX970 (or similar performance) and decent amount of memory (I would not start with less than 8GB). Of course, the more graphics power you have the more seamless your experience will be. I was testing it on a GTX1080 Ti and didn’t experience any glitches.

I started the intro recording, what was a nice start. First in a lecture hall the possibilities for profs are shown and then we go out to the fields to experience real immersion and blow up some castles. Then we have moon landing on the menu and WW II scenes closed by a Titanic stunt. The best way to show the features of such system is to actually take the user to such places, so the intro worked very well for me.

It is possible to go to a lecture hall and write on the blackboard with your VR controller. It is an amazing feeling, standing in front of students and drawing them something absolutely silly.
Moreover you can just pick a location and add premade objects to it. There are like eight hundred premade objects you can put into your scene. There is a pro edition, there you have 1200+ objects according to their site. Still you cannot import your own 3D objects, but you can show any videos or internet sites.

Navigation system was comfortable and easy to use. I am a developer and I was amazed by the seamless integration of all my input devices: mouse, keyboard, VR controllers all functioned in a logical and expected way. In the book “Don’t make me Think” Steve Krug ask the question how an interface should work. The answer is very simple to tell, but very difficult to realize in the real world: as expected. Engage VR reached this point in 2019, their VR works “as expected” at least for me. It is a possible standard for all future VR environments.

For example you could move by using your left vive touch pad, but you could also jump and turn with the right touch pad. This article doesn’t have the space to go into all the details, but I’ve tried like 10-20 VR navigation systems and this felt the best. I plan to write and article comparing VR motion paradigms and I will certainly include Engage VR.

I think 360 movies can revolutionize certain types of education. I started “Gladiators in the Roman Colosseum” and I was totally overwhelmed by being lifted up into the Colosseum pit. You cannot really explain full immersion; you can only try yourself or show to others.
It is extremely useful for learning: it pushes out students behind the so called “affective filter”(basically bored to death by monotone learning). It gives reality, mass, characters to an otherwise dry curriculum. I cannot prove, but I would bet that the enthusiasm towards Roman culture is tripled after watching a 360 movie like this.

I couldn’t check multiple features this time, like user management, collaboration with other team members, building up huge scenes.

Still I can tell you that we have a state of the art 3D/VR learning system in our hands. I respect the tremendous efforts behind such software. If you are looking for a 3D/VR learning environment you should definitely check it out and consider for serious use. I have my doubts seeing 60-70 year old professors getting „diving goggles” onto their faces for the sake of tuition, but in certain cases it is definitely worth building it up. (Australia comes to mind, where you have few students in great distances.) You just need to „extensive VR use required” into the job description for profs. 😉

As for other uses it is difficult to tell. For security or escape routine training it might be useful. It does certainly make sense if you have your team members spread around the planet and you would like to collaborate in a common virtual space. I personally would check it out just to experience a state of the art multi-user editable 3D/VR environment.